We’ve had a pretty busy summer since my last post back in May.  Little Michael has been quite the adventurer, embarking on activities including a trip to Texas, followed by family from Texas visiting us in St. Louis, and a vacation in Montana.

One of our adventures in Montana was a trip to Missouri Headwaters State Park, located right outside of Three Forks and home to the source of the Missouri River.  Our little family is what I like to call a “confluence-connected” family; we’ve visited the confluence of the Missouri and Mississippi Rivers in West Alton, Missouri, on several occasions.  An opportunity to see the source of the “Big Muddy,” the longest river in North America, made the Missouri Headwaters State Park a must-see stop during our time in Montana.  Upon returning from our summer vacation, I decided to get to work on this blog post about our confluence experiences.  Although he’s not even two years old yet, little Michael has already dipped his toes in the waters of two confluences!

I will begin our story right at the source, the source of the Big Muddy, that is! The Missouri River begins in Headwaters State Park at the confluence of the Jefferson and Madison Rivers, after which it is joined by the Gallatin River a little under two miles downstream.   The park also marks the location where the Lewis and Clark Expedition camped in July of 1805, after beginning their journey near St. Louis the previous year.  While they were at the confluence, the three rivers were given their names.

July 2018:  My two Michaels pausing to take it all in at Headwaters State Park; confluences are serious business! 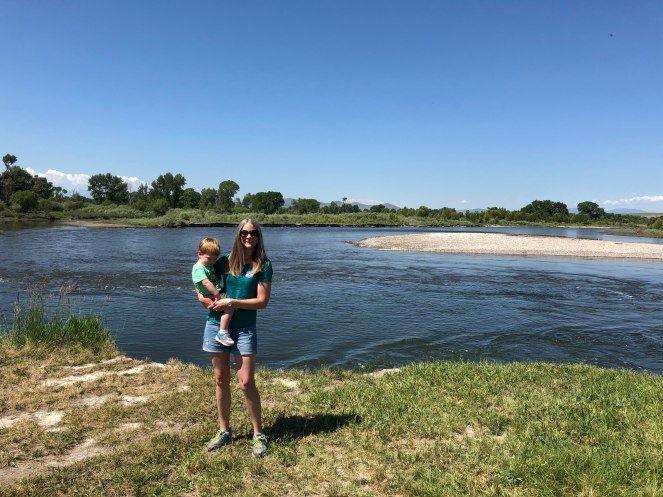 After checking out the confluence, we did some hiking in the park to see where the newly-formed Missouri waters join with the Gallatin River.

We concluded our visit to the Missouri Headwaters State Park with another short hike to get a closer view of Lewis Rock.  Merriweather Lewis created a map of the surrounding area from this vantage point when he was here with William Clark in 1805.  The shade was fairly sparse on this warm July afternoon, and as you can see, little Michael was definitely feeling the sun!

It was exciting to get to see where the Missouri River begins, especially after our visits to the Missouri-Mississippi confluence near St. Louis.

Next, we will follow the Missouri River as it flows from Headwaters State Park north, up to Great Falls and northern Montana, into the northwest corner of North Dakota, then down south to Bismarck, continuing down through South Dakota, forming part of the border between Nebraska and Iowa, continuing south to Kansas City, and then at long last, ending its roughly 2,300 mile journey in West Alton, Missouri, where it joins with the Mighty Mississippi at the confluence.

West Alton is only about 30 minutes away from downtown St. Louis, and 45 minutes from our house.  We have enjoyed several trips to the Edward “Ted” and Pat Jones-Confluence Point State Park.  This park marks the location where, in 1804, Lewis and Clark began their expedition to explore the newly-acquired lands of the Louisiana Purchase.

Our new family of three posing at the confluence of the Missouri and Mississippi Rivers, November 27, 2016.  Little Michael was only 13 days old!

This was our first visit to the Missouri-Mississippi confluence.  My parents drove up to St. Louis to help after little Michael was born, and we decided to go on an outdoor adventure.  It was a windy, cold, and damp November day! 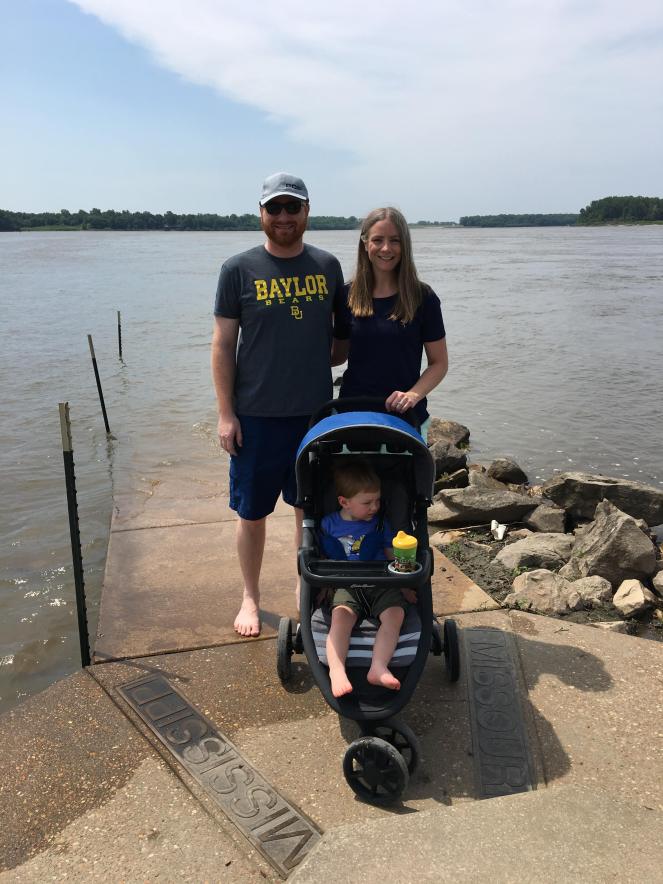 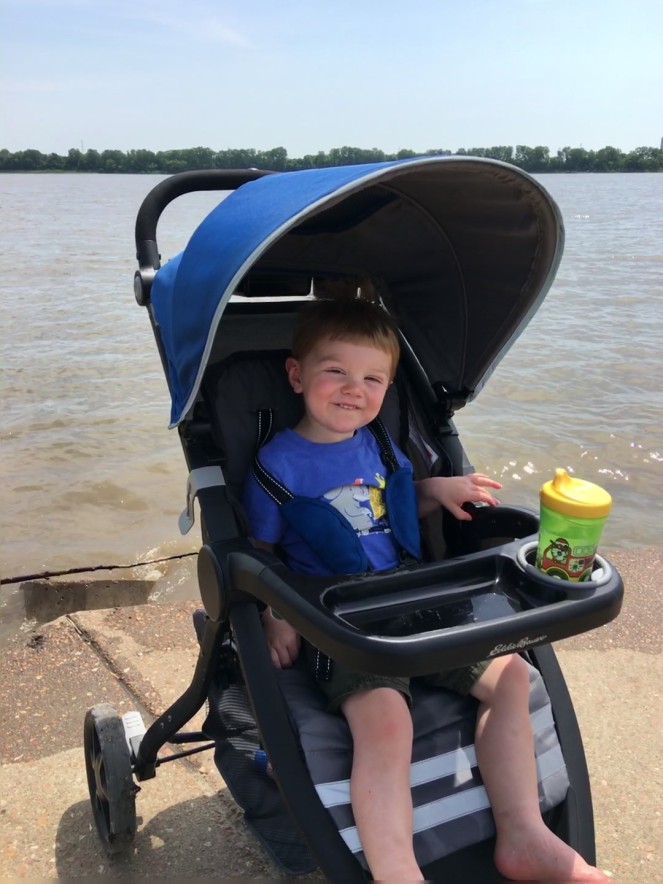 Two of my nieces, Marcella and Mary, visited with my parents this summer, and we took them to see the confluence. 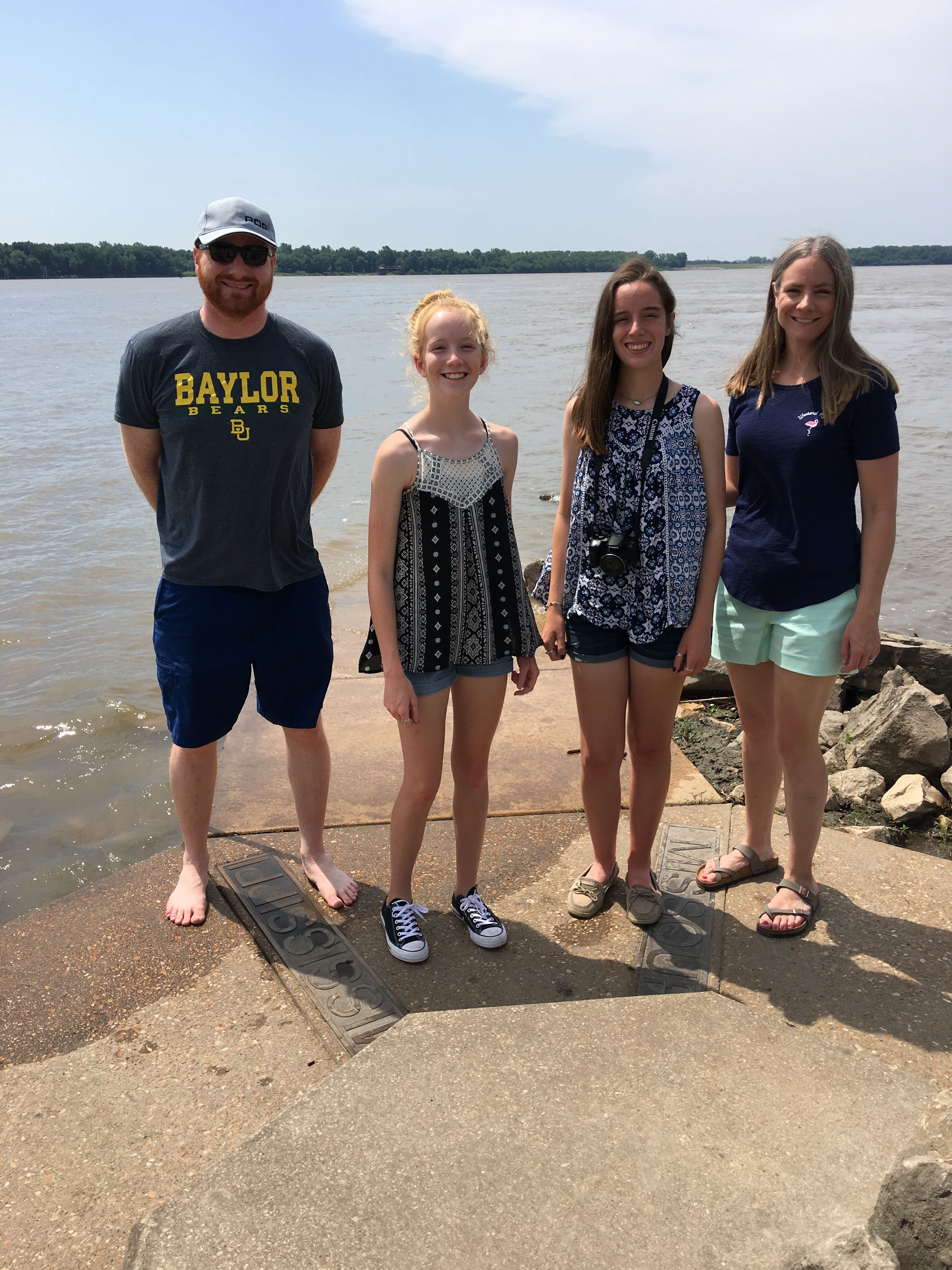 And our most recent visit, summer 2018 as well, with Michael’s parents and sister.  It was a hot and humid June day! 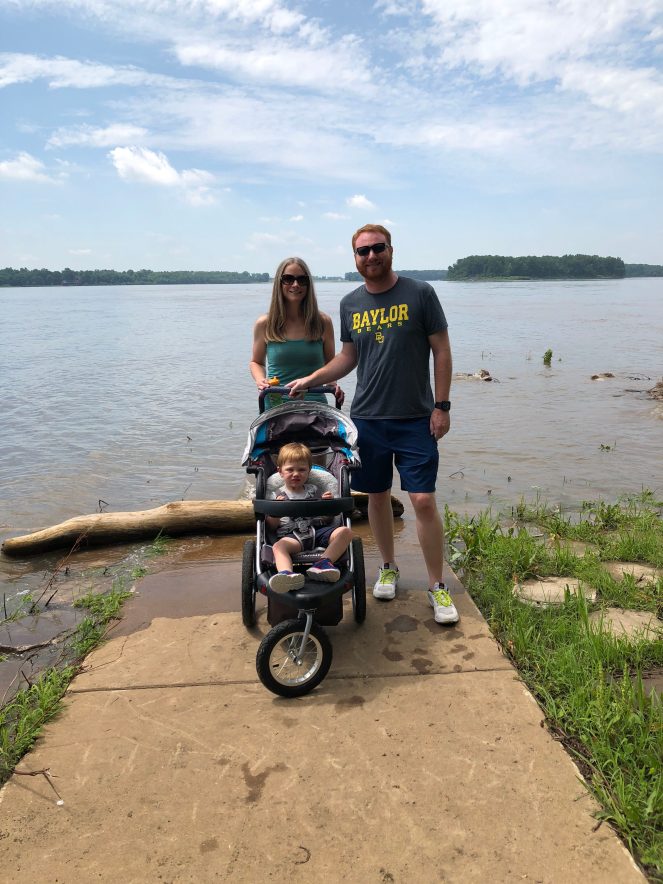 On this last visit, we were impressed with how much the water had risen in just a few short weeks.  The sidewalk we used with the signs marking the two rivers in the first picture is completely underwater in the picture from our last visit.

Getting Our Feet Wet

Little Michael loves water, and he waddled around in the rivers at both confluence points.

Here’s a picture of Michael helping our little one step into the Madison River as it joins with the Jefferson River to form the source of the Missouri in Three Forks, July 2018. 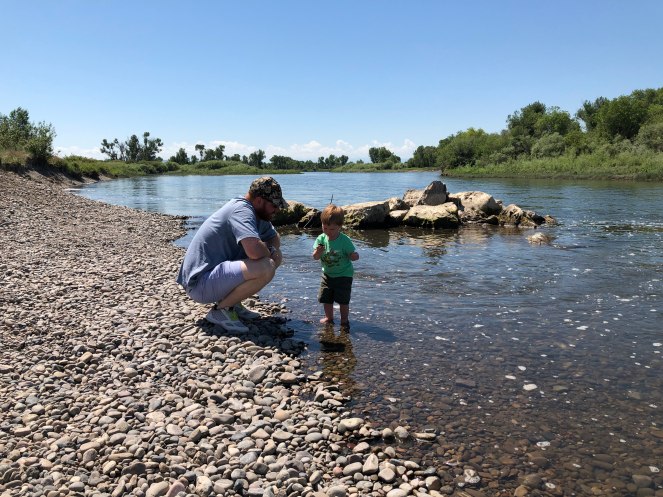 I was struck by the clarity of the water here compared to how it looks near St. Louis, after its 2,300 mile journey. 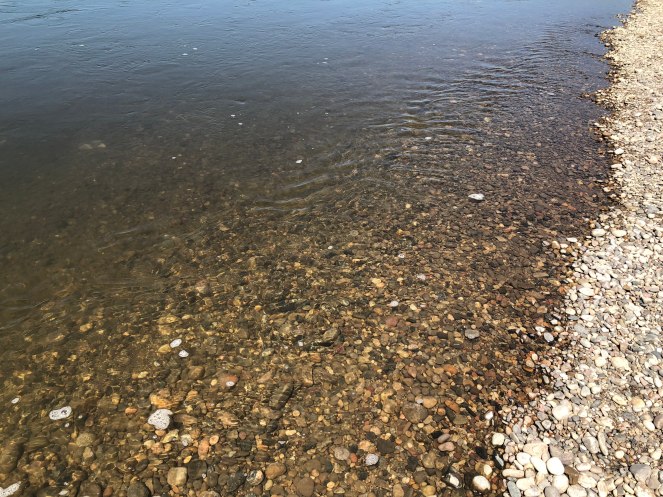 Michael also had Dad by his side when he stepped into the muddier waters of the Missouri-Mississippi confluence in West Alton.  The river water changes considerably as it makes its way down to St. Louis, picking up sediment and debris along the way.

Michael found a beautiful trio of driftwood branches for me at the Missouri-Mississippi confluence this summer, and I scooped up several smooth rocks from the Missouri headwaters when we were in Montana.  I am envisioning these creating a beautiful vignette on a mantle in my future!  A vignette, as defined by the Home Stories A to Z blog, is a “small grouping of objects that creates a pleasing focal point and tells a story.”  This confluence vignette will accomplish both quite well!

The display will remind us of our family adventures at the confluences and the Big Muddy in both Missouri and Montana.