Moving:  The picture above is his first monthly picture in which he’s sitting up.  He has also mastered going from a lying down position to sitting up all on his own. 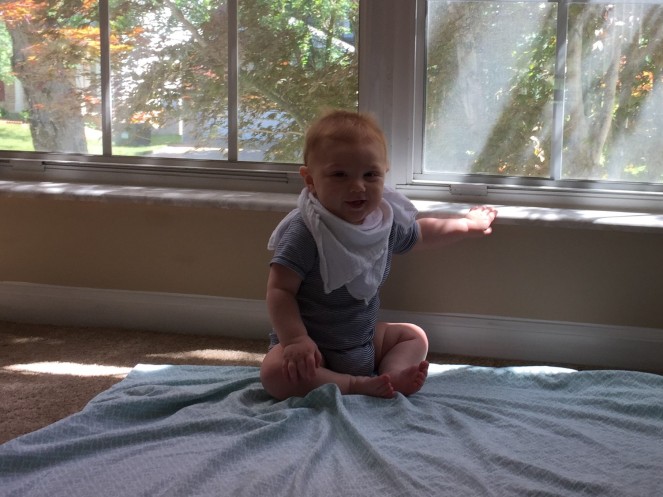 His sensory toys, like the Grouchy Ladybug, keep him entertained when he’s sitting on the floor.

Michael and I keep thinking he is just about to start crawling!  When he is on his tummy, he can get around pretty well by scooting and rolling.  He loves to get on his knees, supporting himself with his hands, and bounce up and down.  I love watching him do this.

He has also started trying to pull himself up on things.  We don’t have a coffee table in our living room, but he has discovered that his ocean walker is perfect for this.

Activities:  In May, little Michael attended his very first story hour/lap time at our public library. 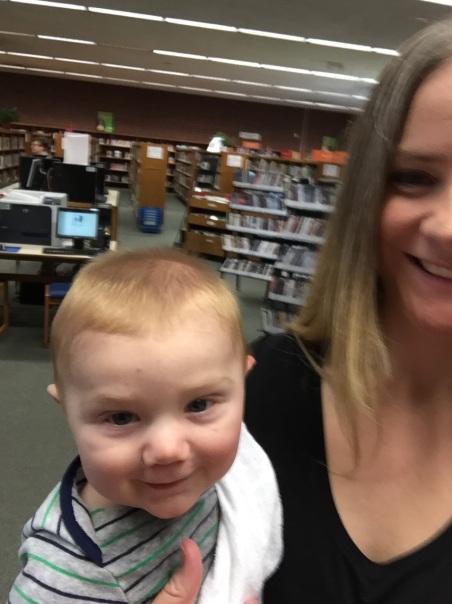 The first time, he was a bit overwhelmed by all the noise, but since then, he has gotten used to the atmosphere of singing, clapping, and lots of boisterous toddlers running and crawling around.

After story hour, he is worn out and always falls asleep in the car.

Books are fascinating, especially his touch-and-feel tractor book with the scratchy bale of hay. 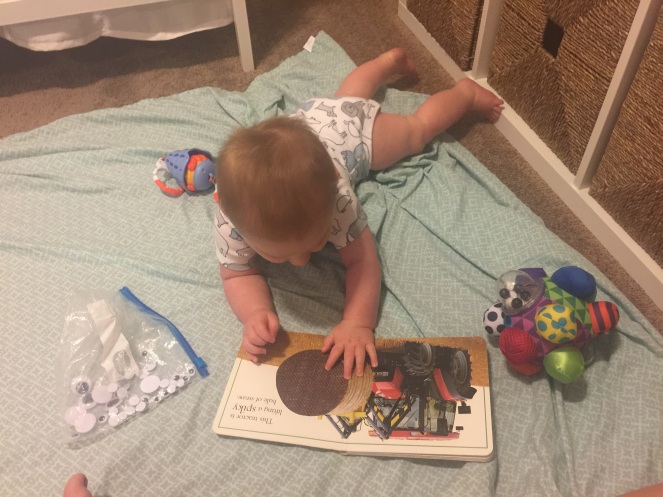 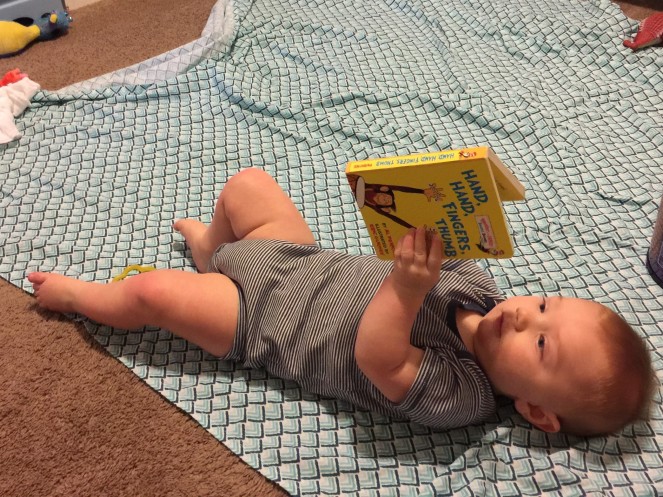 Another activity Michael enjoys is hanging out in the ball pit we set up for him.  We ordered some balls from Amazon and put them in his play pod.  The first time we put him in the ball pit, he had trouble deciding which color to pick up.  He had never been around quite so many toys before.  I can’t wait till he discovers he can throw all the balls out of the pit!

He can’t take his eyes off the smiling baby on the Pampers box, so I cut the face out for him. 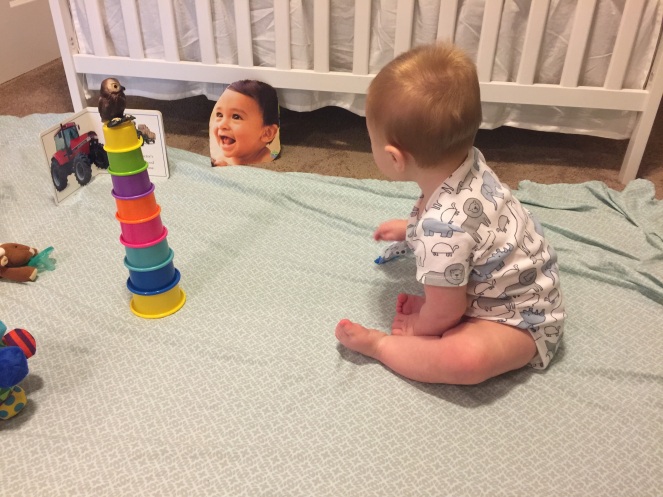 In the picture below, he was on all fours to get a better look at the owl.

Little Michael loves to play with his links.  They’re his go-to toy.  He will sit and remove them from the tray over and over again.

Cruising around the kitchen in the walker provides all sorts of opportunities to get into mischief. 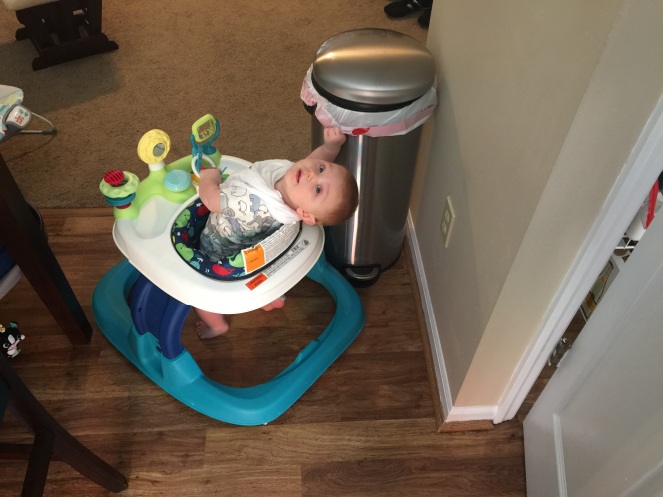 Sometimes, this can be scary for our little one! 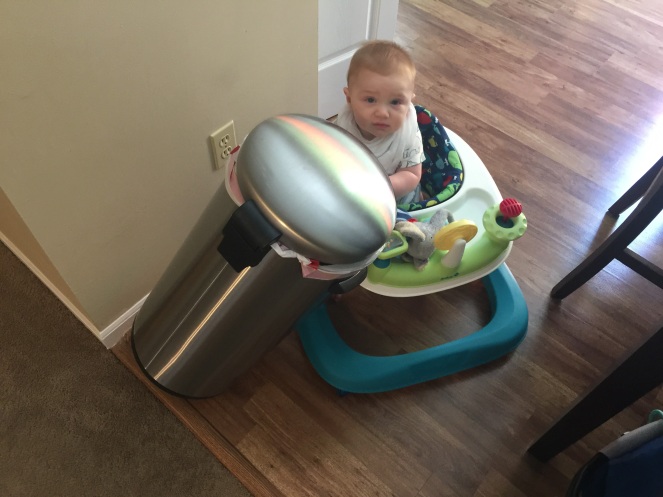 Even though he has a walker with wheels, he still has fun in his stationary ocean walker.

Hanging out with Daddy always leads to lots of laughter, especially when his scratchy beard tickles little Michael’s feet. 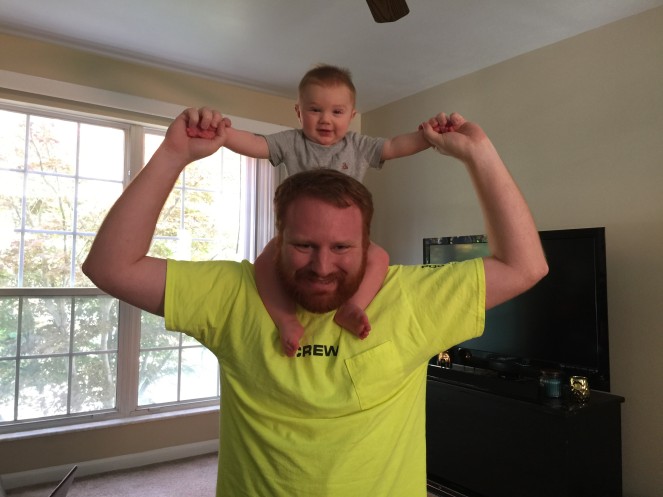 We had an interesting nature activity a couple of weeks ago when a box turtle decided to pay us a visit.

Daddy helped little Michael and the turtle get acquainted.

Talking:  Just in the last week, we have heard him make “m” and “n” sounds.  He also makes a sound like “hee” or “hey” that is really cute.  Michael and I are very amused by the loud screeching and squealing he has started to do when he’s sitting in his Bumbo after dinner.

Hands:  He has started slamming his hands on the floor or the table. He will imitate it if we do it.  When he’s eating, this signals “more, please!”  Other times, it means “I’m tired of this; let’s do something else!”  Little Michael also started clapping his hands together after our first story hour! 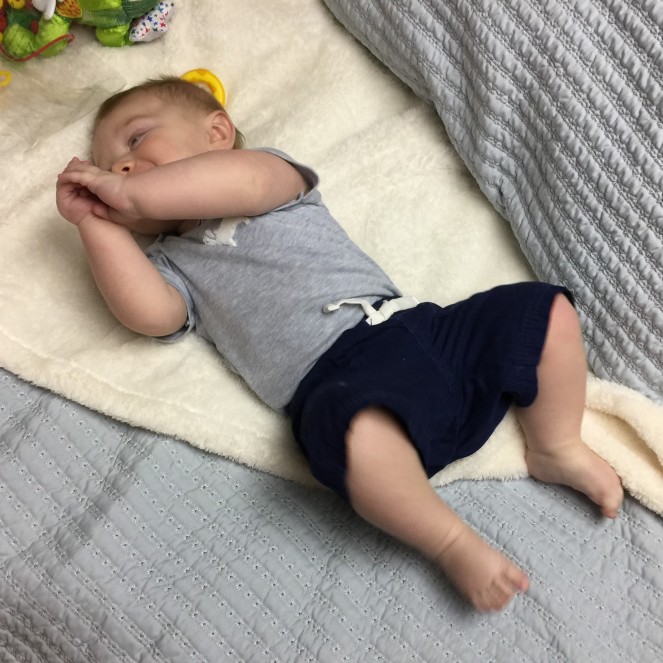 Drumming on the coffee can is also lots of fun. 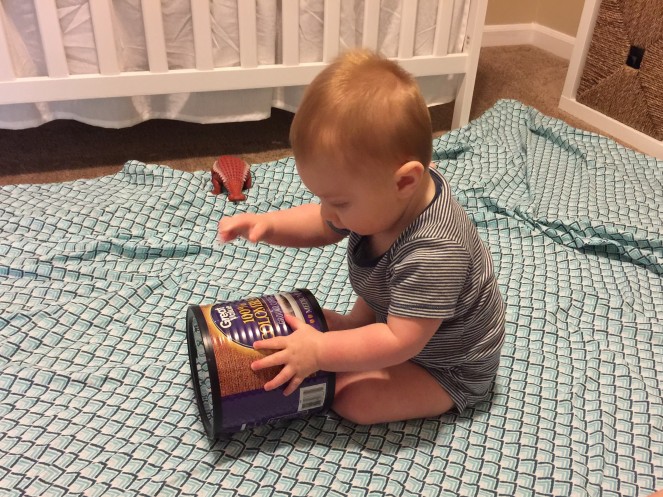 If they are nearby, little Michael will try and reach out to the dogs. 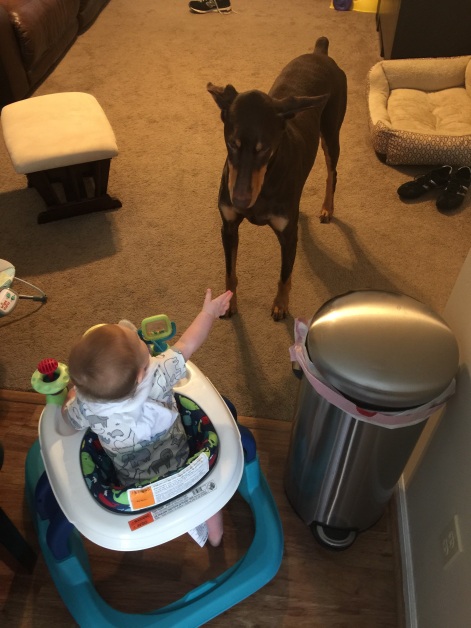 Sleep:  He continues to sleep through most nights, but does still have the occasional middle of the night wake-up.  I love hearing him wake up from his morning nap in a happy mood, talking and cooing to his stuffed animal friends.  Michael and I are gradually trying to make his bedtime earlier.  Currently, he is going to bed around 10:00-10:30 and waking up around 8:00-8:30.  He usually takes a morning nap that lasts anywhere from 2o minutes to 2 hours.

He has a blast in his bath right before bed.  We used the scalp scrubbie he’s holding to eradicate his cradle cap.

Growth:  Little Michael has officially outgrown his infant car seat! At his 6-month checkup, the doctor told us he would soon be in need of a new car seat.  The straps were getting too short for his shoulders, and his feet went over the edge.  His weight was also nearing the seat’s limits.

Here he is with his dad, getting strapped in for his last ride in the car seat we used to bring him home from the hospital 7 months ago.

I sat with him in the back, feeling sad about how quickly our little one is growing and changing.

Like he so often does, Michael fell asleep on the car ride home. 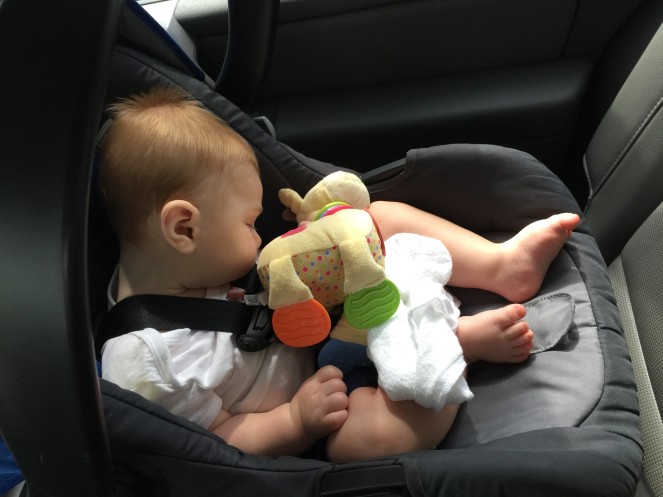 I’m sad about how quickly he seems to have grown out of the infant stage, but also excited about all the changes we get to watch him go through.  No more infant seat means no more car seat on the stroller.  Now he gets to sit in the stroller seat like a big boy!

I think he was very proud.  The stroller seat gives him a whole new perspective when we’re on a walk or out and about.

Eating:  He is still nursing, but now eats cereal, jars of vegetables with rice, noodles, or potatoes, meat, and fruit at least twice a day.  We introduced a sippy cup with water, but he hasn’t quite got the hang of it yet.

He sits in his Bumbo and is happy to spend time with us at the dinner table.  The Bumbo is great because we can take it with us when we go out to eat.  Little Michael gets to sit with us at the restaurant table, and instead of holding him and giving him a bottle, we feed him some baby food.

Or give him a plastic bag to play with!

Finally, I will conclude the 7-month post with some picture of Michael’s first Father’s Day.  Here is little Michael with his daddy after church, with the Arch in the background. 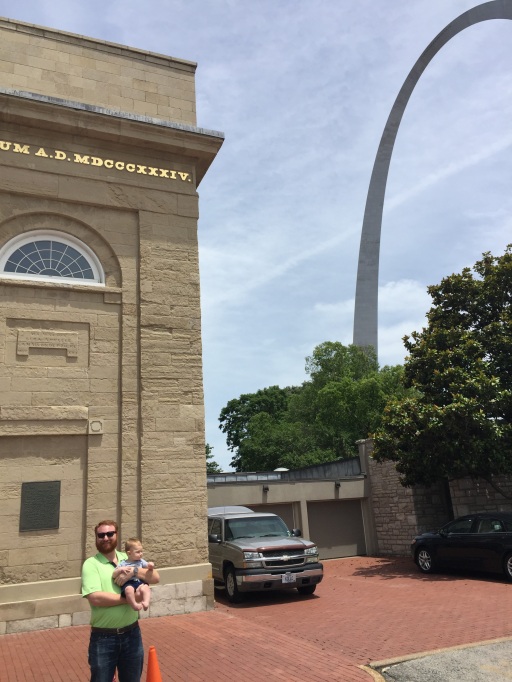 Little Michael adores his dad, and is all smiles when they spend time together.

I’m so grateful little Michael has such a devoted and loving father. 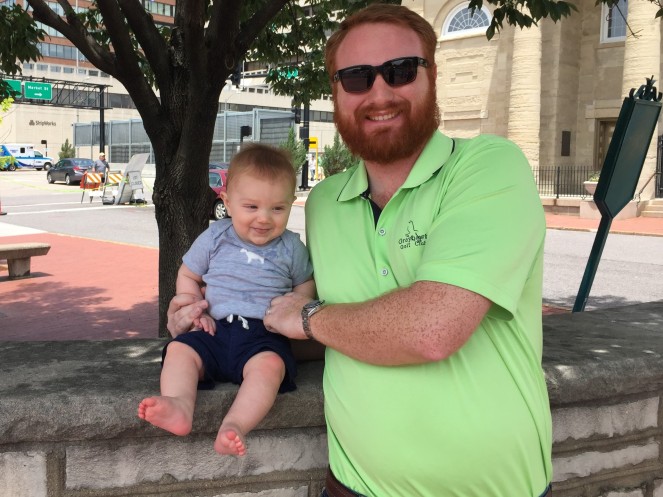 6 thoughts on “Little Michael at 7 Months”