It also happened to be on Mother’s Day, so Michael snapped a picture of us by the Arch after church. 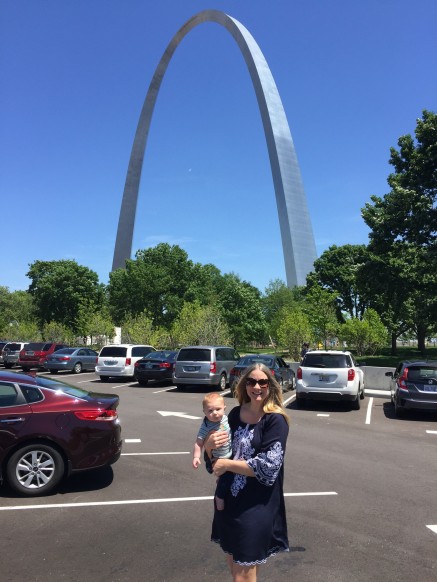 Here’s an update on our little one at half a year.

Moving:  I think he is every close to being able to sit up on his own, but he still kind of collapses when he sits up without a prop.

If he is laying on his back, it’s almost a guarantee that he will have his head up in the air to see what is going on around him.  He gets quite an ab workout! 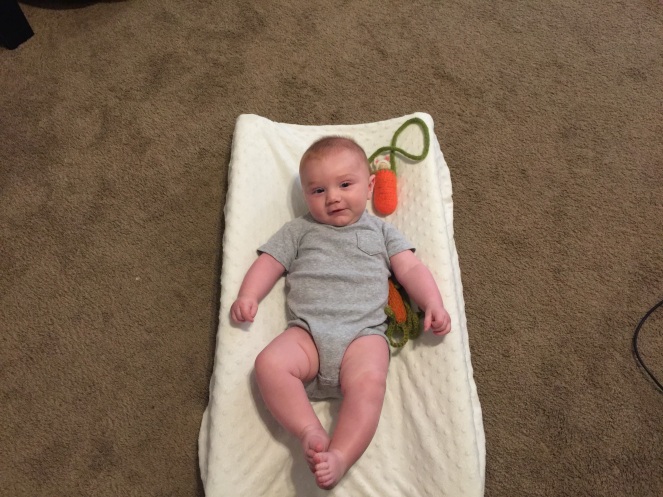 Talking:  Little Michael recently started discovering all the sounds he can make.  He lets out high-pitched squeals, screams, and screeches whenever the mood strikes him.  Daddy has fun making silly noises to get him chuckling and giggling.

Hands: He likes to investigate everything his adorable little hands come into contact with.

I made him some sensory baggies with items from Dollar Tree.  He always ends up putting the plastic bags in his mouth.

Banging and hammering toys is so much fun!

But what’s even more fun is dropping them on the ground, watching them plummet down, and hearing the loud crash when they land.  One of his favorite places to drop toys from is his whale walker.  Unlike the big blue ocean walk-around, this one lets him go wherever he wants.

He’s giving me his “I’m a little stinker” smile after throwing all his toys on the ground.

He has a new fascination with tags.  The tags are much more interesting than the actual toys.

He likes to explore and hold the pages of books.

Sleep:  Little Michael no longer takes his naps in the swing.  The last weekend of April, we packed up the swing and started putting him down in the crib for his morning naps. We let him cry himself to sleep; he’s usually out within 10-15 minutes.   He sleeps really well during his morning nap, but only takes an afternoon nap if he falls asleep in the stroller during a walk or in the car seat during a drive.

His sleeping position in the car seat drives us nuts; he always ends up with his head straight down between his legs or to the side like this: 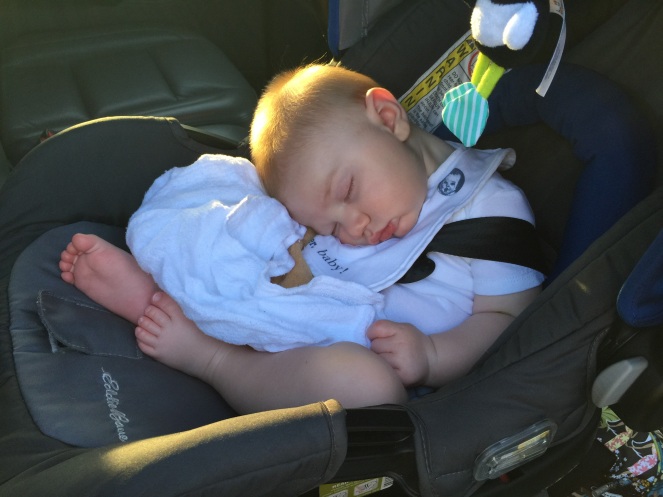 During most nights, he sleeps between 8-10 hours.  He even fell asleep when Michael and I had a dinner date, and Michael’s boss, Anita, babysat for us.  She set him up with blankets and pillows, and he looked like a little prince! 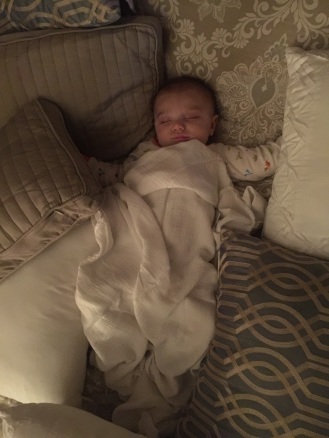 Growth: He is currently wearing 12-18 month baby clothes.  At his 6 month checkup, he measured 28 1/4 inches, and he’s in the 97% percentile for height!  He weighed 19.2 pounds.  The doctor told me he will only be able to use the infant car seat for another month or two.  This is not surprising since his feet already reach over the edge.

He is finally long enough to fit into his first pair of blue jeans.  Here he is looking handsome like Daddy before church.

Eating: We started jarred meats a few weeks ago.  He did not seem very happy about the taste and texture of Gerber’s “beef and gravy” or any of the other meat flavors for that matter!

Fortunately, I quickly discovered that he does like meats when they come mixed with something else, like chicken and rice or chicken and veggies.  Little Michael definitely enjoys fruit in a jar.  In the picture below, he’s having a fiber-filled pear puree.

Activities and Adventures:  When he’s looking at books, the pictures with faces really grab his attention.

Little Michael spends lots of time on the floor on his tummy, where he rolls around, plays with his toys, and stretches his legs.

Looking at photographs of cousins is fun, too!

He loves watching Kaiser.  He is utterly fascinated with both of our dogs. 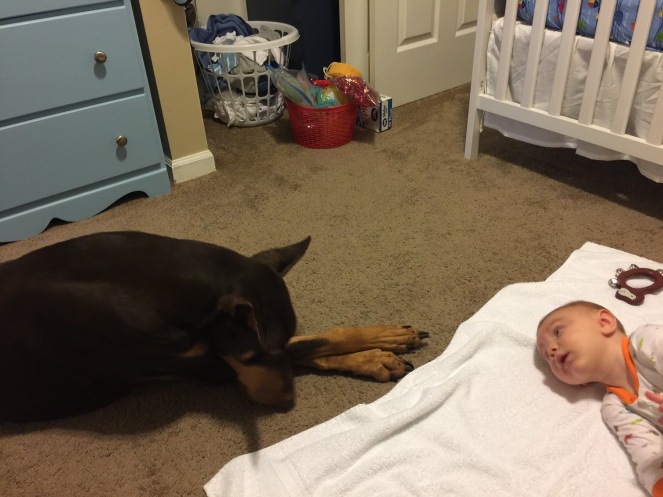 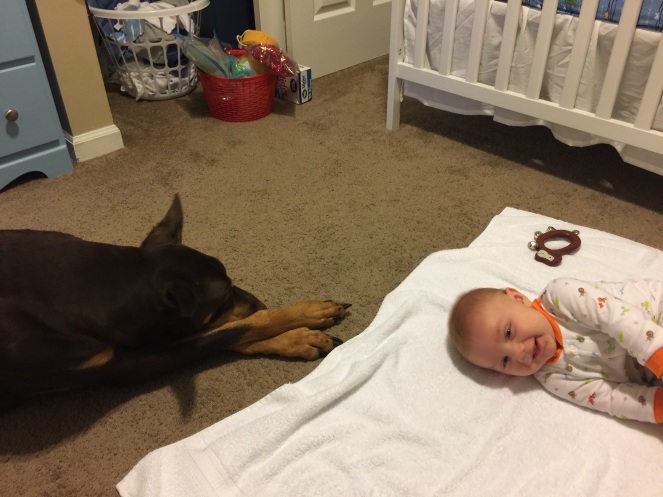 He celebrated his first Easter on April 16. 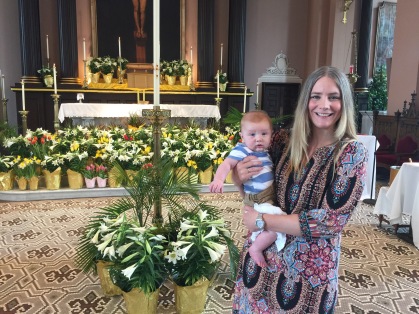 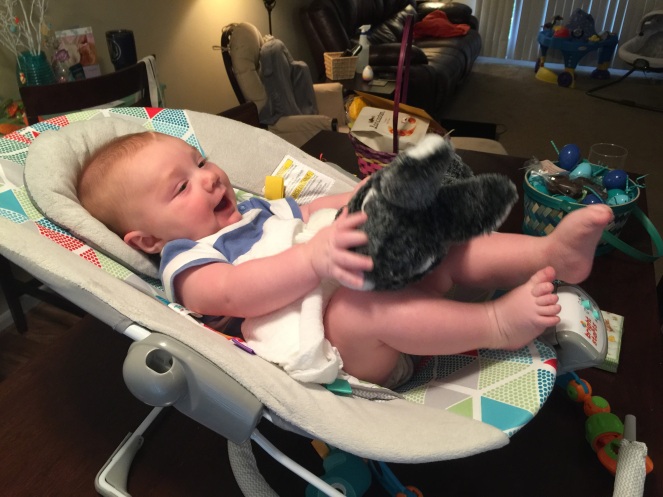 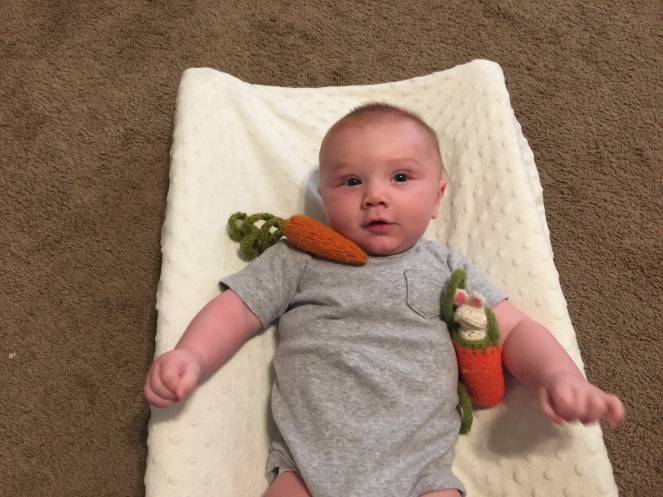 Since he is a St. Louis native, we were happy for the opportunity to take him to a Cardinals game. He attended his first MLB game on April 19.  It was a lot for him to take in!

He was not too keen on all the loud noise.  The roars from cheering fans and explosions from the fireworks that went off after a home run made our little one cry.  But I know he will have a great time going to baseball games with his dad when he’s older.

In the beginning of May, little Michael embarked on his 4th trip by plane.  We headed down to Texas to visit family.  He enjoyed lots of love and snuggles from his Nana and Grandpa. 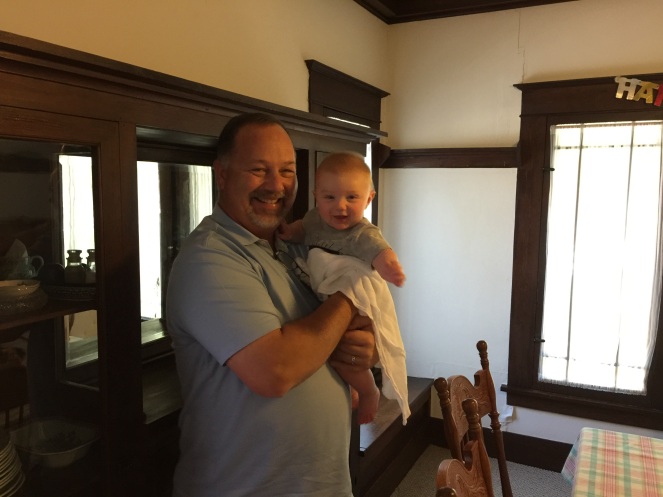 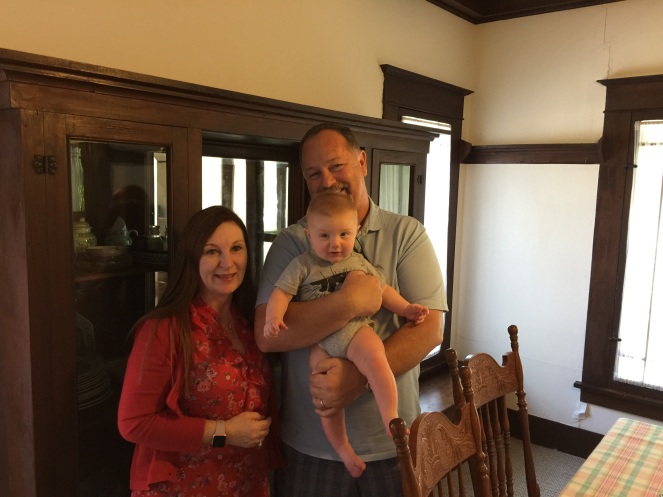 We had great weather during our time in Texas, and he loved sitting outside with his Oma.

Little Michael’s cousins showed him lots of love, too!

And he even got to celebrate his GroBpapa’s birthday.

Happy 6 months to our little one.  We love how he fills our days with big, happy smiles and lots of giggles. 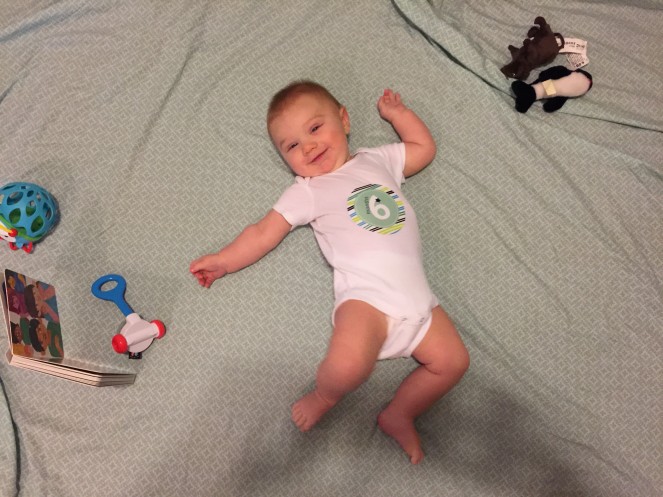