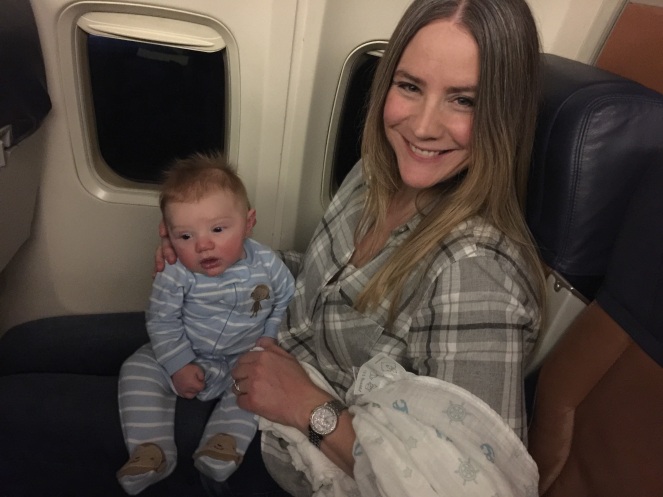 Little Michael had his first plane ride last weekend!   We went down to New Orleans for a Super Bowl weekend hosted by Michael’s work.  I’m happy to share that it was a success.  We left St. Louis Friday evening and arrived in New Orleans shortly after 8 o’clock.

Going through security was definitely a learning experience for us.  In addition to our little monkey baby, we had the stroller, car seat, diaper bag, and rolling carry on. 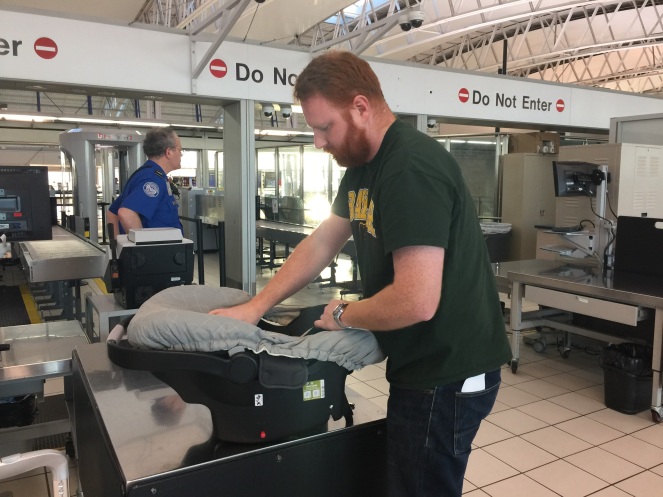 I also had 4 bottles of breast milk in case we needed to give him a bottle over the weekend.  The milk is what held us up the most.  After I declared the bottles and the ice pack accompanying them, the milk had to be thoroughly inspected.  A TSA agent with blue latex gloves opened up the bottles and placed them in a machine for a few minutes.  Once it was clear that the milk was not a threat to other travelers, the bottles were returned to me in their cooler.  Little  Michael, who was blissfully unaware of the goings on at security and in a peaceful slumber, had to come out of his car seat.  I held him and walked through the metal detector, but not the giant body scanner in which you hold your arms up and spread your legs.  After we walked through the metal detector, I was pulled aside and had my fingers and hands tested for bomb debris.  Then my giant diaper bag, with wipes and over 4 ounces of A&D in it, was completely taken apart and rummaged through.  Fortunately, it passed inspection and was returned to me.  All of the TSA agents dealing with our “stuff” were actually very friendly and courteous about the whole process.  I was grateful for this since they’re not always like that!  Once all of the inspecting was complete, we were reunited with our stroller and car seat.  They had been scanned with some sort of machine as well.  We reassembled all of our baggage and gear and headed to the terminal.

Michael stayed with our belongings while we were waiting for our flight.  I held little Michael in my arms and walked him around the terminals.  We went into a sunglasses store which mesmerized him because all of the glasses were displayed with bright white lights behind them.  A sweet Guatemalan woman was working in this store.  She commented that little Michael must look like his dad (implying that he looks nothing like me!).  She told me that in her culture, they say that when a baby boy takes strongly after his father, it means the dad really, really loves the mom.  This was a nice thing to hear!  I walked around with Michael until a little before boarding started.  I gave him a fresh diaper and then met back up with Michael to prepare to board.

There were a few things we did to make the plane ride go as smoothly as possible.  Michael paid a little extra to board in an early group so that we could secure seats in the back row of the plane.  I wanted to nurse little Michael during takeoff and figured this would be the easiest place to do that.  We also bought this giant bag for gate checking the car seat.  It’s like a thick, sturdy duffel bag to protect the car seat.  Michael had no trouble putting the car seat in it before boarding.  He was also able to wear it on his back like a back pack when we were walking through the airport.  It kept the car seat clean, dry, and in tip top condition when it was stowed during the flight.  The bag would also be great if you checked the car seat with your luggage.   When you’re not using it, the bag folds up into a small and light weight carrying case.  It held up well, and I will definitely use it the next time I fly.

We were flying Southwest, so I was able to board with little Michael right after the A group.  I met back up with Michael who had saved us seats in the back row.  Shortly before take off, I started nursing little Michael to help his ears handle the changes in pressure.  It worked really well, and he was sound asleep by the time we reached flying altitude. 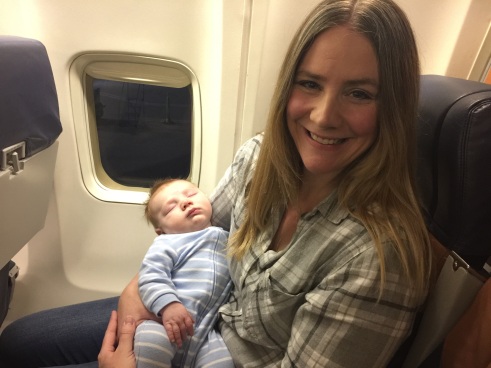 He woke up after the beverage service and seemed to be having a great time staring at the people walking by and the lights above us.  When we started to descend, we gave him his Bevo pacifier which kept his ears comfortable.

We arrived in New Orleans around 8:00 p.m., and I was relieved that the flight had been such a breeze.  After Michael gathered up our luggage from baggage claim, we wheeled everything outside to wait for an Uber to take us to our hotel in the French Quarter.

A man overheard us talking about getting a taxi and recommended an Uber instead, which is actually what Michael usually gets when we’re traveling.  The man told us the taxis charge $30 extra when you have a child.  I’m glad we were able to get an Uber.  Little Michael did so well during the car ride to the hotel and while waiting for us to get checked in. 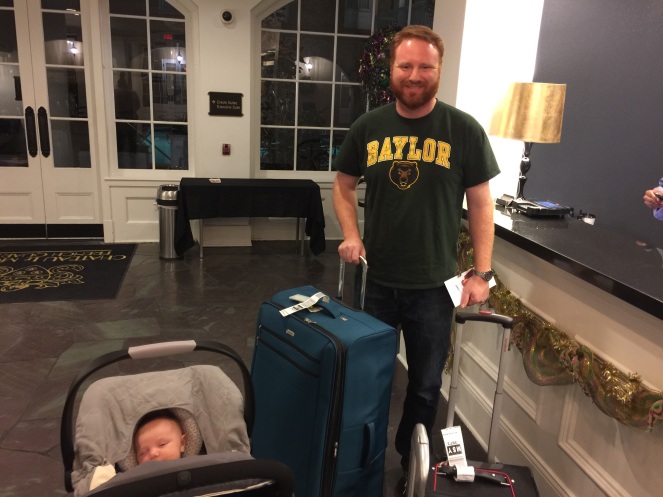 After we were settled in our room, Michael’s boss babysat our little traveler so we could grab some cocktails and a bite to eat on Bourbon Street.  We were so happy to get out for a bit once we arrived.

We reserved a crib for our little one, and I had to laugh when it was wheeled into our room.  It reminded me of the cribs you see in the movies that they used in old 1950’s hospitals.  Despite its looks, he slept through the night all three nights we were there!

I brought a few of his black and white pictures and Mr. Panda to make him feel at home in his hotel crib.

Michael was well rested and able to take in the sights and sounds of the French Quarter.  I used the carrier quite a bit while we were there.  He even got to walk down Bourbon Street! 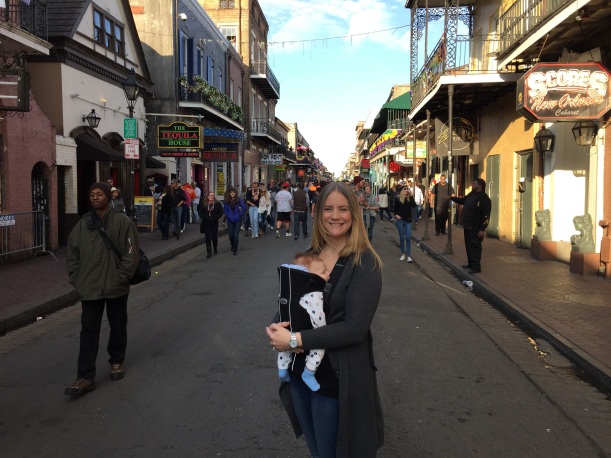 Papa Michael stopped for a tasty Lucky Dog on Bourbon Street.  We enjoyed beautiful weather while strolling around the French Quarter. 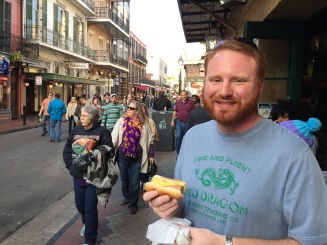 We came across Music Legends Park on Bourbon Street.  It’s an outdoor venue with live jazz, a beignet stand, bar, and restaurant, all in a park-like setting.

My favorite stop of course was Cafe Du Monde where we devoured some fresh and delicious beignets and frozen Cafe Oles.  Yummy!

Michael had fun relaxing with his daddy during the Super Bowl party Sunday night.

Eventually, however, he requested a change of scenery, so we moved outside and sat by the pool.  It was a beautiful evening with an almost full moon.  We both enjoyed being outside on a moonlit night in the mild weather.

We headed back to St. Louis Monday morning.  It had been a terrific weekend, and we were so proud of our little one for being such a good traveler.