Michael has already assembled little Michael’s crib and changing table, and I’ve been anxious to fully dive into the process of setting up and decorating the nursery.  However, before I could fully embrace my urge to nest, we had to deal with One. Small. Problem. 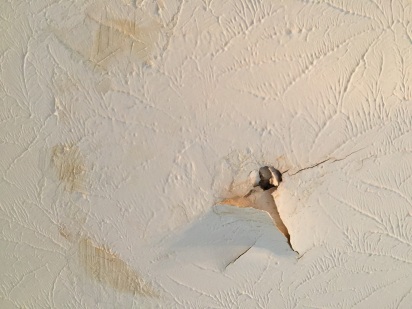 Or maybe one not-so-small problem! 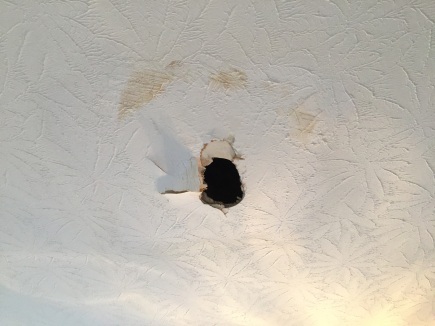 There’s a leaky hole in the ceiling!  I was upstairs a few weeks ago, blissfully puttering around in the nursery during a rain storm.  While I was arranging onesies and trying to make a crucial decision: to hang baby clothes in the closet on little blue hangers or fold them neatly in drawers, I heard water droplets landing on the carpet behind me.  I turned around, looked up at the ceiling, and sure enough, the rain was coming in.  Now, before I continue, I have to give you a little bit of background about how the ceiling came to be in such a sad state of affairs.

When we started negotiating to buy the house last December, our inspector let us know that there appeared to be a minor leak above one of the upstairs bedrooms.  He explained that it looked like it could be repaired by simply replacing the boot on the vent pipe coming out of our roof.  Nice, I thought.  I love it when messy things like a leaky roof have an easy fix.  Our realtor added the boot replacement to a list of items that needed to be taken care of by the seller prior to our move-in date.  All was well.  So, why am I showing you pictures of a hole in our ceiling after the move-in date?  Unfortunately, the person responsible for the necessary repairs to the house, the seller’s realtor, lacks integrity.

The sellers live in Chicago and entered into an agreement with their realtor that basically placed him in charge of everything having to do with the house. He chose and hired people to do the repairs, etc.  Usually the “repairman” was his brother.  This guy, this realtor, is, to put it very nicely, a slime baker.  He spends all day baking slime and then serves it up to people for dinner.  Just think of all the words used to describe the Grinch in the song, “You’re a Mean One, Mr. Grinch,” and you will have in your mind a perfect image of this realtor.  And we knew this about him going into the buying of the house.  We wanted the house and liked the neighborhood badly enough that we were willing to deal with this man.  Because of this, it’s usually pretty easy for us to employ a sense of humor whenever we encounter problems in the house.

Every little thing that needed attention or repairs in the house prior to our move-in date was found by us, upon moving into, living in, and using the house, to have been “rigged” in some form or another by the repairmen hired by this realtor.  A few examples include, but are not limited to: the pantry and linen closet shelving reinstalled backwards after the interior of the house was painted so that any item placed on the shelves would immediately slide down and onto the floor; ceiling fans replaced after painting but left unbalanced or only able to spin at like 100 miles an hour; floor boards missing under the carpet so if you stepped on certain areas, your foot would sink down;  the metal casing/housing surrounding the HVAC unit in the basement apparently lost the screws that attach it to the unit, so it was attached with clear packing tape (not very adhesive in a moist environment); clear packing tape also used to attach a broken window to its frame; and of course, the boot on the roof.  We were told by the seller’s realtor that the cracked boot that was allowing water to leak down the sides of the vent pipe on the roof and into the attic and then the nursery had been replaced, and that the leak would no longer be an issue.  Unfortunately, as I discovered while working in the nursery during the rainstorm, that was not the case.

Michael went up into the attic and then onto the roof this weekend to take stock of the situation and figure out what needed to be done to repair the leak.  We were both thinking he would find a pretty big problem, something that may require the hiring of a roofer.  Imagine our surprise when, after going up and investigating, Michael found the cause of the leak was that the wrong size boot was put on the pipe.  The “repairman” hired by the seller’s realtor had nailed a new boot that was an inch too big over the old boot and called the job done.

Amazingly, the repairman had to have noticed that the circle surrounding the pipe was too wide to form a seal, and that water would leak down the sides of the pipe and into the house.  However, instead of driving less than a mile down the road to get the correct size of boot from Home Depot, he hammered the big one on and went about his day.

All this because somebody was lazy:

Luckily, Michael is extremely handy around the house!  On Sunday, he found the correct boot at Home Depot, installed it over the pipe on the roof, cut out the sheet rock from the ceiling, and began the work of patching up the hole.  After leaving the patched hole to dry, he got busy working on the nursery.  He moved furniture around upstairs and put some of it down in the basement.  I wanted to use a chest of drawers from the office/exercise room in a closet in the nursery for storage, so he helped arrange this for me.  He also spent about an hour rewiring my TV, Roku, and cable equipment in the exercise room.

Then it was time for the biggest task of the day, assembling the IKEA Kallax shelving unit my mom got us for the nursery.  It’s the centerpiece for the arrangement of the nursery, and I’ve been very anxious to have it assembled.  The unit has 25 spacious shelves for storage as well as a top shelf for decorating.  We’re so happy to have this in the nursery!  I shared a little bit about my inspiration for using the Kallax  back in my 23 Weeks post.  My sister found this awesome idea for using the shelving unit on a house blog, which you can see in the little boy’s room here.

Even though IKEA’s humorous directions clearly imply this is not a one-man job, my husband conquered the Kallax all by himself! 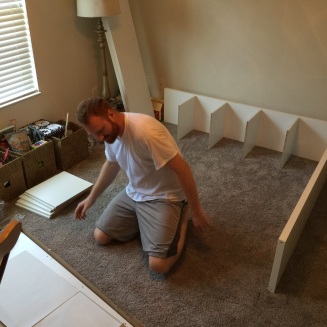 After being up on the roof in the hot sun, repairing the hole in the ceiling, and moving furniture all over the place, he completed the assembly of the Kallax. 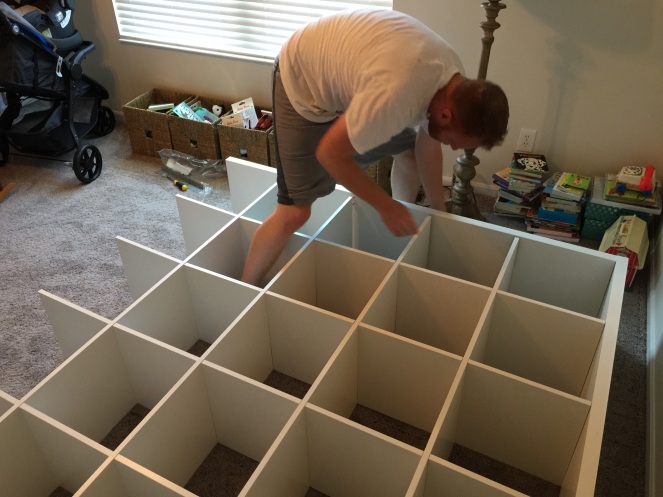 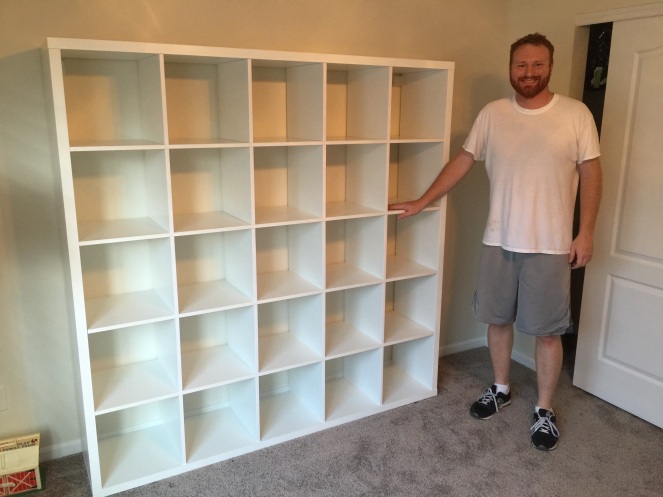 Fortunately, Michael was able to relax in the evening.  We ended the day eating spaghetti and meatballs and watching the unranked Longhorns defeat #10 Notre Dame!  It was a great day for me in the middle of Labor Day weekend.  The new boot on the roof will prevent future leaks, the nursery ceiling repair is complete, and now I can get to work decorating and arranging things in little Michael’s nursery.  I’m very fortunate to have such a handy and hard-working husband!

3 thoughts on “Repairs in the Nursery”