We had our first “snow” experience in Cincinnati yesterday.  It was a big deal for me!  I’m sure the locals would laugh at how excited I got when I spotted the first flurries.  We were driving, and I was ready to stop everything, leap out of the car, and run around in the wind that was whipping the light sheets of snow flurries across the road.

Having lived in Texas my whole life, I haven’t really accumulated a lot of snow time.  New Braunfels had its last significant snowy weather in 1985, when I was only three years old.  My mom has pictures of our family bundled up in the snow and our house and yard covered by a pretty thick blanket of the powdery white stuff.  I’ve also played in the snow in El Paso when we went there to visit my grandparents.  Driving through the mountain town of Fort Davis in west Texas in the winter allowed me to see some patches of snow on the side of the road and on top of the mountains.  That’s basically the sum of all of my encounters with snow.  I was ecstatic when the flurries appeared in Cincinnati yesterday!

Michael spotted them first when we were preparing to head out for a day of driving.  The temperature outside was thirty-one degrees, and a light wind was blowing.  I couldn’t capture the flurries in the air with my camera, but I did spot some on the car.

The flurries continued and even increased as we headed up north.  Eventually the sun came up and there were no more.  Then, around 2:30 in the afternoon, the clouds returned and with them the flurries!  This time we could see them coming down in sheets.  It became very windy, and the flurries were swirling around the road in pretty white clouds.  We were driving through a neighborhood with a golf course and stopped for a second to snap these pictures. 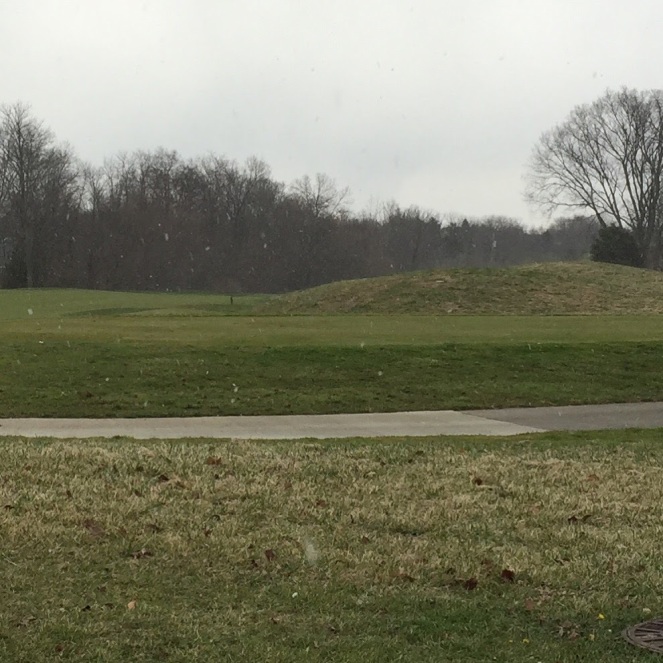 The last few days had seen mild temperatures in the mid sixties, so the flakes were never going to build up on the ground.

The flurries had all moved on by early evening.  This morning it’s 28 degrees outside, with clear and sunny skies.  I know we won’t have a white Christmas this year, but now I’ve enjoyed a preview of wintry weather to come.