Michael and I stumbled upon an amazing house while we were driving around Fairfield Township yesterday.  Fairfield Township is a suburb located about 20 miles north of Cincinnati.  The township was started in 1803, and it is bordered on the west by the Great Miami River, a tributary of the Ohio River.  Driving through Fairfield, it looks like your typical suburban area, but the terrain is very hilly and heavily treed. 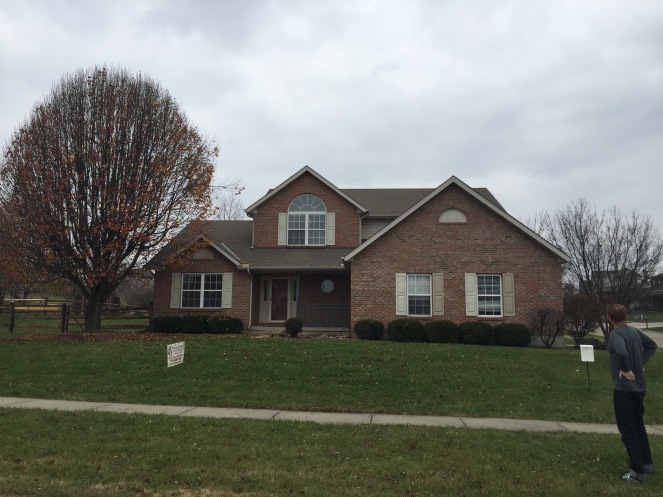 The house we explored on this overcast day is located on an almost half acre corner lot.  Several beautiful and very “Ohio” trees are scattered around the lot, and they caught my eye immediately.  It also has a spacious backyard that is already fenced!  We are excited about this because so many of the houses here do not have fenced yards.  In Texas, houses in subdivisions are almost always separated by a privacy fence or some other type of fence.  In Ohio, fences seem to be the exception, not the rule.  The yards just kind of spill into each other.  We see a lot of playhouses, swings, patio sets, and dogs in the backyards, but usually there’s no fence keeping these things separate from the other houses.  Invisible fences for the dogs are very common.  Lots of yard have the little flags to alert people that the dog is contained by an invisible fence.  If the homeowner’s association allows it, you can usually put up a fence of your own if you desire, and that’s what we are planning on doing if we end up purchasing a home without a fenced yard.  However, a house with a fence already in place is much more desirable!  Many neighborhoods have restrictions for the type of fence you can erect, and some just do not allow fences, period.

I love this giant “Christmas tree” in the backyard.  The kitchen window looks directly out at this awesome fir. 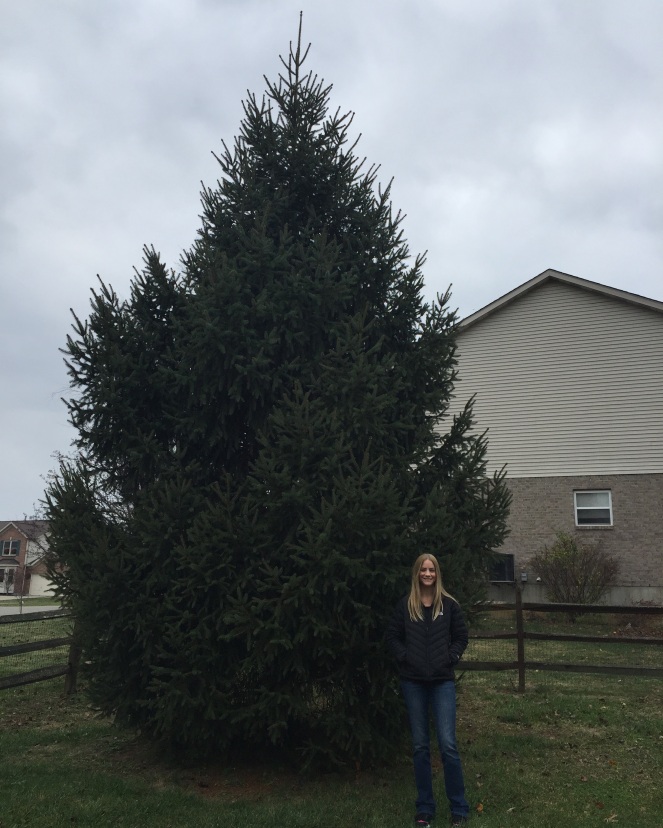 We were both surprised and pleased to see this last glimpse of fall foliage in the front yard.  The majority of the trees here were completely dormant and had lost all their leaves when we arrived in November. 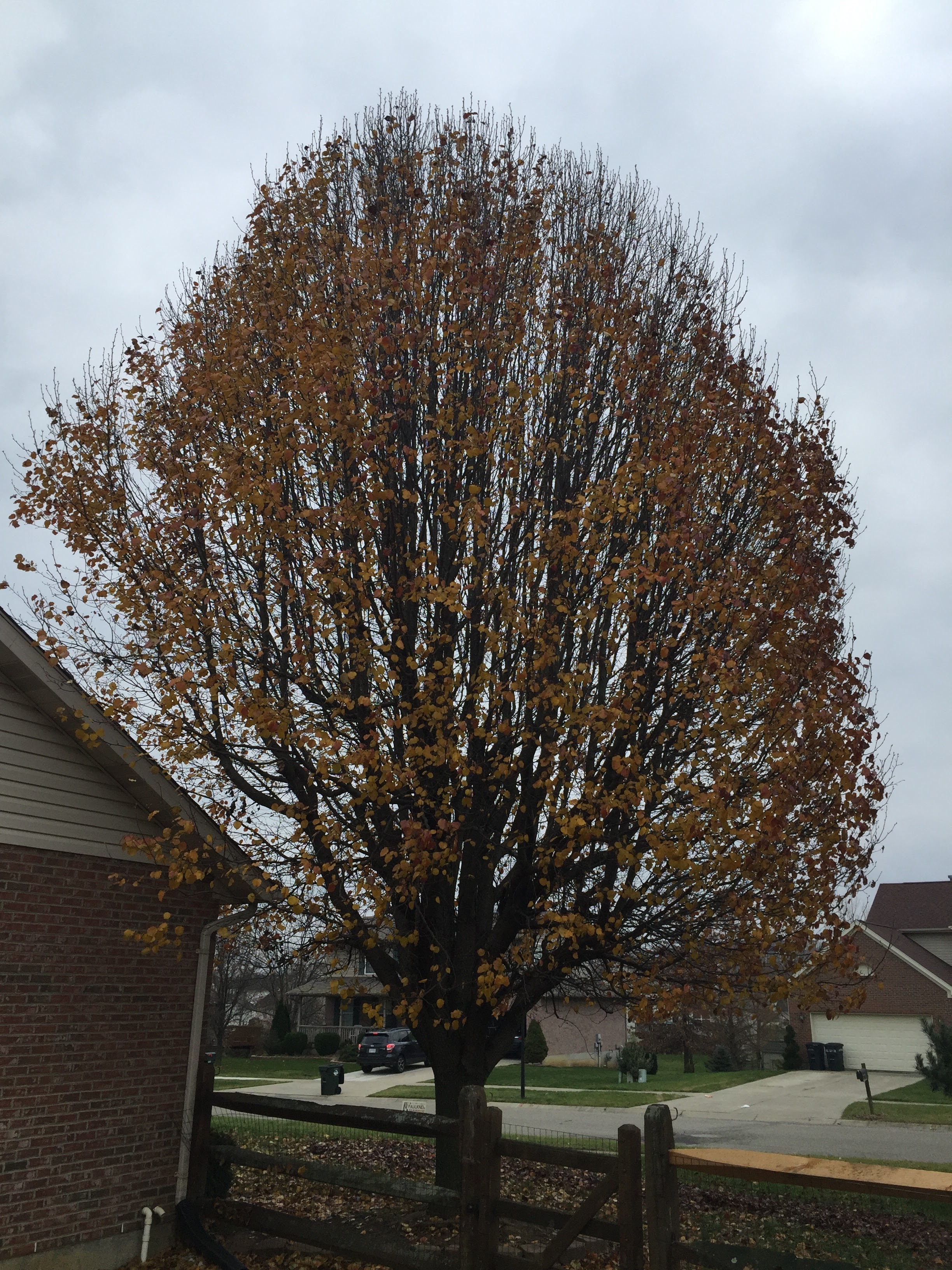 We loved what we saw on the outside, and our enthusiasm did not wane when we went inside the house.  The living room is the most impressive room due to the fact that it has 18 foot vaulted ceilings with large windows that let in lots of light, even on a cloudy day. 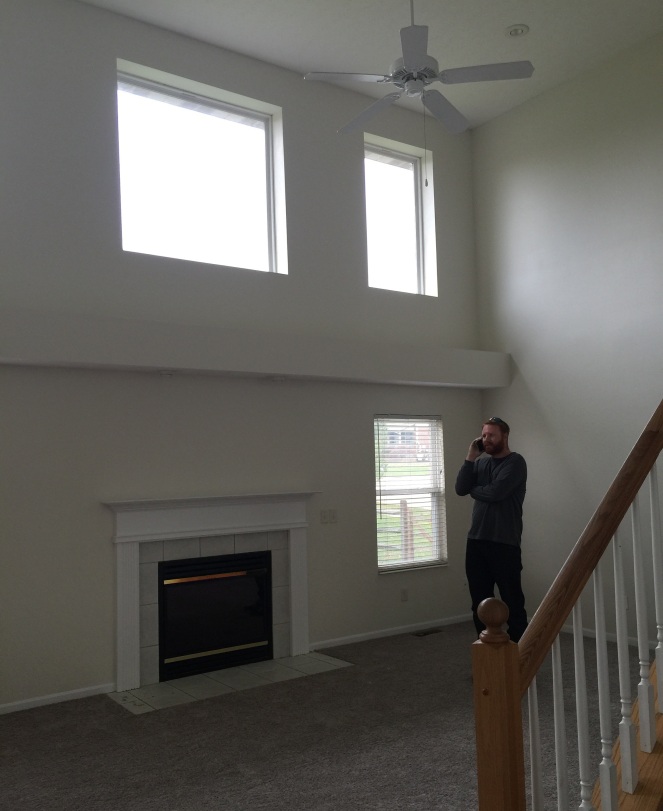 Earlier, when I looked at the online listing, I was disappointed because the pictures did not show a fireplace.  However, this house does have a fireplace, just not a chimney!  The fireplace in the living room is called a direct vent gas fireplace.  Again, Michael and I learned something new while exploring a potential house.  Direct vent fireplaces draw in air from the outside as well as vent air back to the outside.  According to what we have read, they heat the room just like a traditional wood burning fireplace.  Many houses here have this type of fireplace.  The fireplace in the living room also has a mantle, and I’m already imagining hanging stockings and decorating it with candles and a conch shell.

The kitchen has vaulted ceilings and plenty of cabinet and counter space.  I would love to make the small counter on the left my “cottage coffee nook.”  It would be the perfect home for our Keurig; coffee mugs would go in the cabinet above, and the k-cups would be stored in the drawer below.  It’s funny when we look at houses because only a few, like this one, have allowed me to envision our own personal touch.  Before we looked at this house, the last few houses we toured, with the exception of the house with the mansard roof, did nothing for me.  Michael felt the same way.  They lacked appeal for us.  In this house, I was literally jumping up and down with giddiness when I spotted certain aspects that I liked. 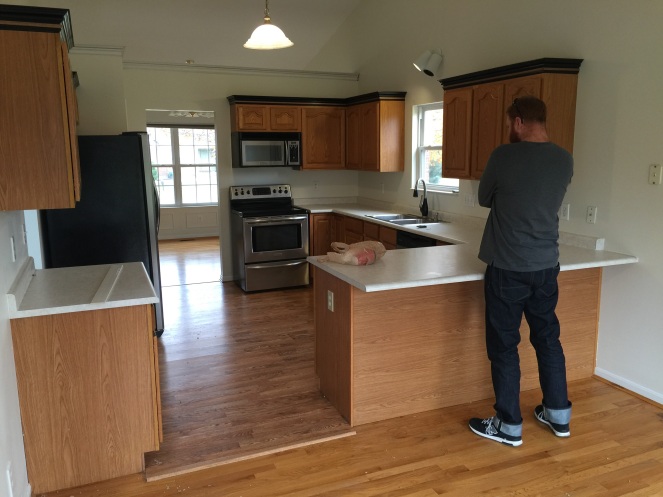 Basements are a new phenomenon for Michael and me.  We find them very intriguing!  Neither of us have any experience or familiarity with basements, and I think our realtor, Jeff, finds it amusing every time we get to the basement area on a home tour.  They usually encompass the entire area of the house, which means plenty of space for storage or living quarters.  More often than not, the basements are unfinished, which means a large open space with concrete, insulation, and plumbing.  If we end up in a house with an unfinished basement, we will use it for storage and possibly as an exercise room. 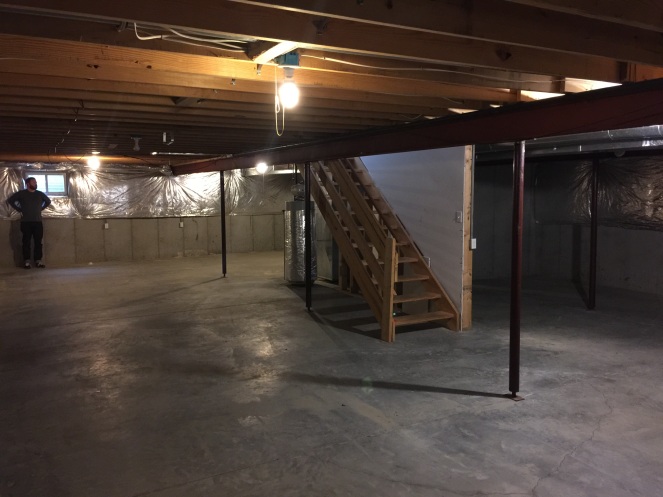 Unfinished basements can always be finished by adding flooring, drywall, etc.  They allow the opportunity to add bedrooms and media or living areas to the home, and are usually plumbed for future bathrooms.  Less frequently, the homes we look at already have a finished basement.  One house we toured had three bedrooms, including the master, and two full baths in the basement.  It was neat, but I don’t think I would want my bedroom to be in the basement.  The basements always have windows, but they are small and it definitely feels like you are in a basement, not a regular level of the house.  It appears that the owners started the process of finishing this basement; however, they only got as far as the commode, and as my sister pointed out, an IKEA indoor swing!  You never know what you’re going to find when you’re looking around in someone else’s house. 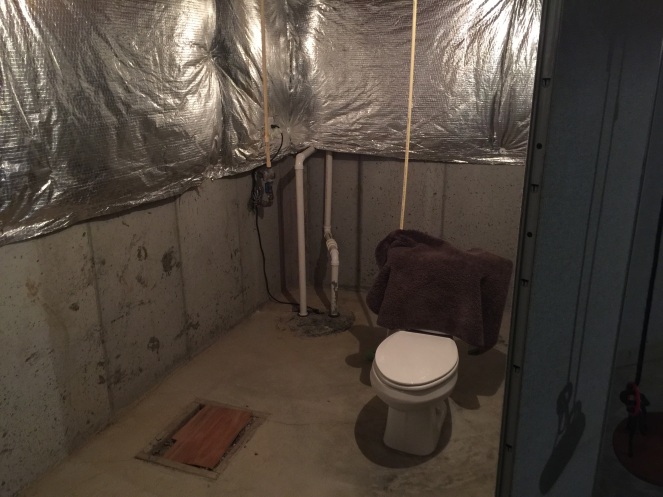 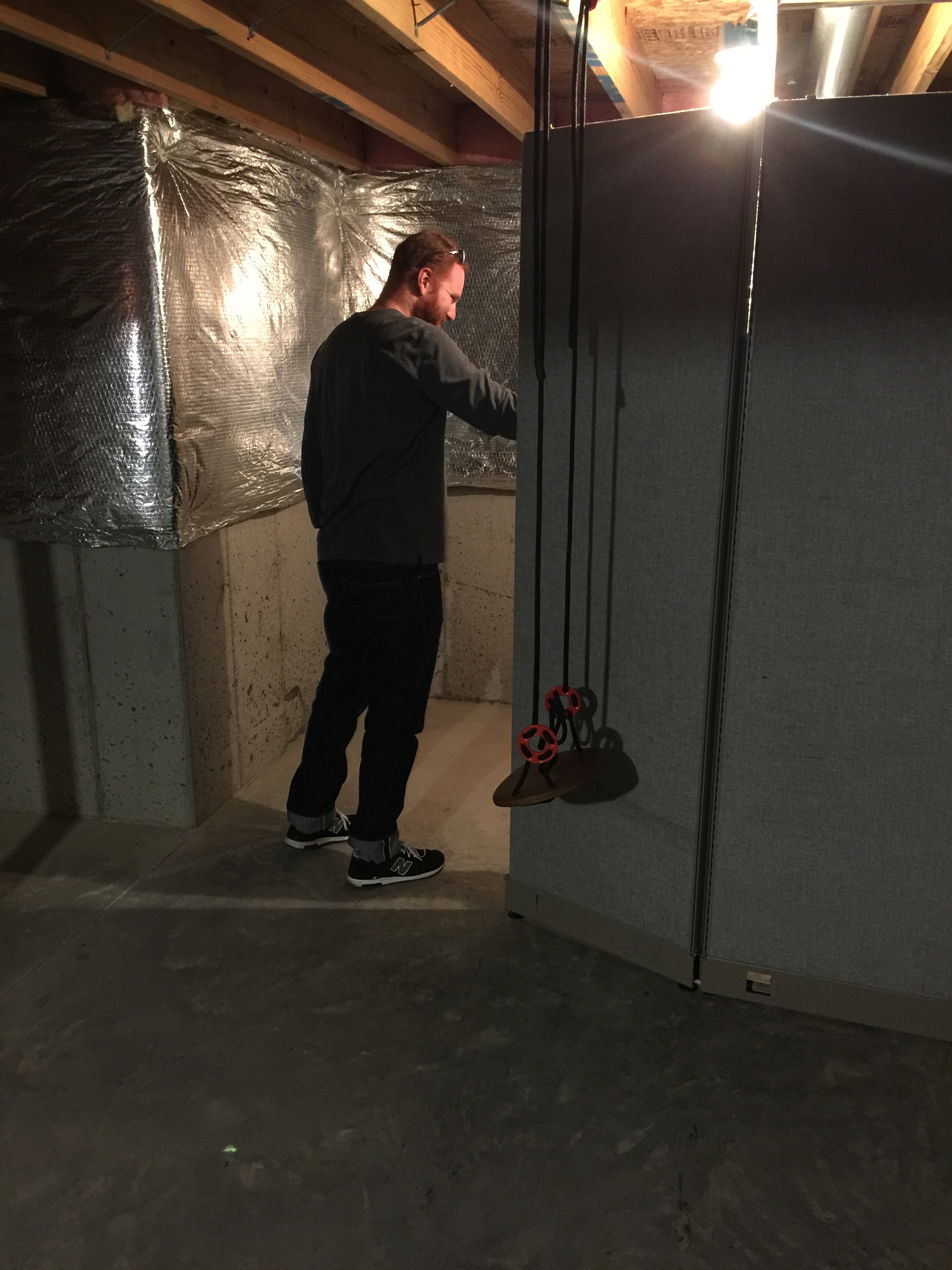 Regardless of the oddities we spotted here, a basement provides a world of opportunities.  After we finished exploring the underground, we returned to ground level and gave the backyard one last look.  The kitchen nook has a door that leads out to this cute blue deck.  I’m already imagining adding some nautical and coastal touches to it.  Michael is ready to grill some ribs and fajitas out here on his Big Green Egg! 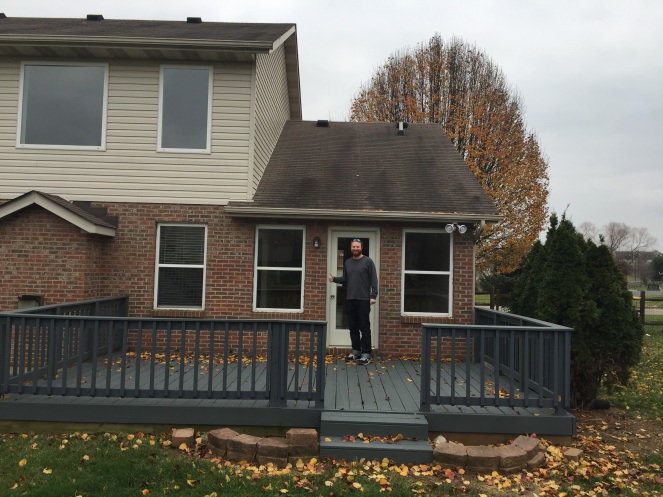 One of my favorite things about this particular house is its proximity to an incredible park, Rentschler Forest MetroPark.  It’s only a 5 minute drive from the house.  The 400 acre park  is located in a forest; what more could you want? 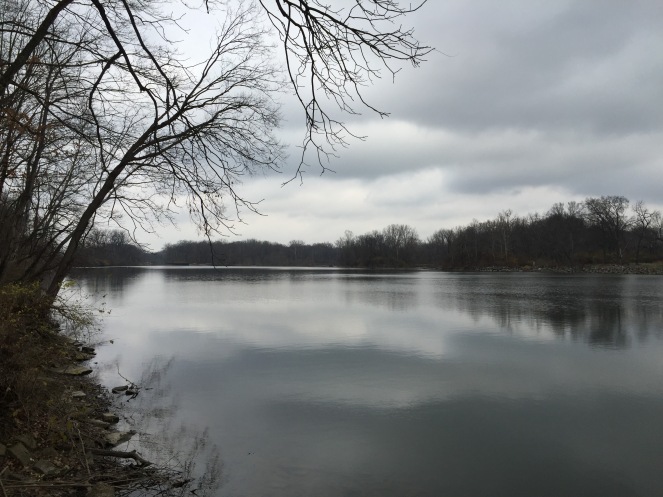 Michael and I spent a few minutes looking at the Great Miami River and exploring the park  after we toured the house.  It has over 6 miles of walking and nature trails, and they connect to another larger recreational river trail that continues outside the park boundaries.  While Michael was in training and I was living with my parents in New Braunfels this past summer and fall, I spent hours walking and hiking with Kaiser.  I’ve continued going for long walks in our new neighborhood, and can’t imagine living somewhere where a long, strenuous walk is not an option.  I was thrilled when Michael discovered this park so close to the house!  Even if we don’t end up in this particular house, we have discovered a wonderful park and river to visit with Kaiser.