We expected the Day 2 drive to be considerably easier than Day 1; we were only going 480 miles from Memphis, TN to Cincinnati, OH.  We had driven 696 miles the previous day and saved the shorter drive for Day 2.  The strong winds blowing against a foreboding gray sky should have been a warning when we loaded up our cars Saturday morning.  It would prove to be a tedious day of driving.  We were both in good spirits in the morning because we let ourselves sleep in.  We guided the Armada and Suburban onto I-40 a little after 10:00 a.m. and headed northeast to Nashville.  I was feeling refreshed and enjoyed my last pumpkin pecan breakfast bar with some coffee from the hotel.

Emotionally, I felt better than I had on Day 1.  The drive from New Braunfels to Memphis the day before was full of teary eyes for me.  By Friday night, I was probably more exhausted from just being sad than I was from the driving.  It’s amazing how many emotions and thoughts  crept into my mind as I drove.  “What are we doing?”; “How could we ever want to leave Texas?”; “We’re going to be so far away from our families.”  I kept counting all the birthday parties I would miss for my nieces and nephews.  My mind kept zeroing in on the fact that I was no longer going to be able to drive the short 20 or so miles to see my parents, sisters, nieces, and nephews.  Visiting Michael’s family would no longer be an easy three hour drive away.  I continually replayed the sad goodbye with my parents and sister from earlier that morning.  I remembered my last visits to my other sisters’ houses.  Over and over again, I started to cry and longed to be driving in the opposite direction.  I drove almost the entire Day 1 in silence and didn’t listen to my tunes until we were only an hour or so outside of Memphis.  I just wasn’t in the mood for music.

Since we were both in separate cars, I had a lot of time to think.  I helped myself snap out of my crying spells by refocusing on all the positives about this move.  I had only taught for 8 years before we decided on this change, and I was pretty miserable.  Don’t get me wrong, I loved teaching my students, middle schoolers and elementary schoolers alike.  However, so much of a teacher’s job in the public school system is compromised of doing everything under the sun except teaching.  The data, high-stakes testing, test-driven instruction, and intense pressure made me miserable, not the students.  Michael’s pursuit of this opportunity in Cincinnati allowed me to leave the profession.  I feel like a tremendous weight has been lifted from my life now that I am no longer a teacher.  I will be working part-time with the company for our first year or two in Cincinnati.  I am very excited about helping with this new, from the ground up project.

I am also looking forward to exploring a brand new state and city.  I have never lived outside of Texas, so a move to Ohio presents an entirely new experience for me.  Cincinnati is relatively close to many amazing cities including Pittsburgh, Chicago, Louisville, Lexington, the East Coast, and even Toronto!  Michael and I both enjoy talking about weekend trips to these nearby destinations.  Another thing that helped me focus on the positives was knowing that our families will eventually be able to come and visit us because we will be Cincinnati homeowners by some point in 2016.  I tried and am still trying to remember all these positive aspects of our big move whenever homesickness creeps in.

Now back to my Day 2 story!  I did not find myself tearing up every 15 or so miles like I had on Friday.  This may be due in part to the fact that Day 2 quickly became a cold, windy, drizzly, then rainy gray mess on the highways.  On Friday we enjoyed mild temperatures and clear blue skies.  Driving a long distance in the rain and wind is a lot more wearisome than cruising in near-perfect weather conditions.  In addition to the weather, we encountered several traffic woes.  I was already impressed with the amount of road construction I saw to widen the freeways in Texas and Arkansas.  Well, this construction continued nearly all the way across Tennessee and into Kentucky.  However, this time it delayed, or rather, stalled us.  We sat on a one-mile stretch of I-40 outside of Memphis for over an hour.  The scenery at this spot was not spectacular, so I didn’t have much to look at.  I did pass by some unique vines and had plenty of time to snap a photo.  They looked like friendly monsters stumbling around in the woods to me.

When the traffic finally started to move, I was sorely disappointed to see the source of our hour-long delay.  A scattering of construction workers were milling around a single construction vehicle at one end of a bridge.  That’s it.  I was expecting to see a large crew lowering one of those concrete barriers with an industrial-grade crane.  Needless to say, we were both tired of driving after this, but we were more eager to get some miles under our belts and decided, via texts, to push on through to Nashville before stopping.  The portion of I-40 leading to Nashville is called the Music Highway.  I enjoyed listening to Cory Morrow’s song, Fighting the Nashville Blues on the way in. We pulled into a Nashville Taco Bell for a quick and delicious lunch before steering our cars onto I-65 N towards Kentucky.  I am very grateful they have Taco Bells in every major city in the United States! 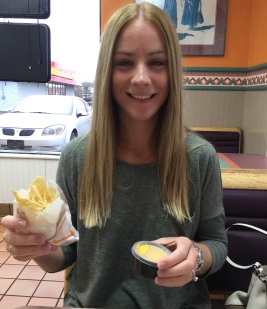 “Beeeautiful country though, isn’t it?”  This line from Del Griffith (John Candy) in Planes, Trains, and Automobiles kept entering my mind as we drove across Kentucky.  We passed steep, tree-lined hillsides and drove over bridges with scenic river views and abundant fall foliage.  A sign soon alerted me that I was on the Kentucky Bourbon Trail.  I spotted another sign for the Jim Beam distillery.  The highway was littered for signs for various Kentucky bourbon whiskey distilleries and tourist attractions.  We were soon in Bowling Green, home of the Corvette!  There is also a GM assembly plant and Corvette museum in this town.  Rain and drizzle continued for most of the rest of our drive.  We encountered one more construction delay an hour or two outside of Louisville.  This one consisted of a traffic diversion into one of two turnpike style lanes lined on each side with concrete barriers.  Our average pace for the next twenty miles was between 45 and 55 mph.  It was a relief when the diversion ended and we found ourselves back on a regular highway.

Our final stop before reaching Cincinnati was Louisville, Kentucky.  I spotted a sign for Churchill Downs soon after entering the city limits and thought about how close we would be to the Kentucky Derby!  It will only be an hour and a half drive from Cincinnati to Louisville.  We found a place outside of the city for a final coffee and fuel stop. When we got out of our cars, we realized it was time to break out our winter gear.  It was no longer raining very much, but the temperature was in the mid-thirties, and it was quite windy.

The final stretch of our drive was 88 miles on 71 N.  It was the easiest part of the entire trip for me because I was eagerly anticipating finally arriving in our new home, Cincinnati.  I always expect grand things and was not disappointed with my welcome into the state of Ohio.  First, I glanced to my left as we drove over a bridge on the edge of Kentucky and was treated to a spectacular nighttime view of the Cincinnati skyline.  Then, the next bridge we crossed took us from Kentucky over the Ohio River and into the Cincinnati area.  It was an impressive suspension bridge with a blue “Welcome to Ohio” sign across the top.  Michael texted me “welcome to our new home.”  We had finally made it to Cincinnati.

Our hotel for our first three nights in the city was the Hampton Inn at Eastgate.  We lucked out again and had a room on the first floor, right next to a side door.  We were still bundled up as we unloaded our luggage, kennels, and doggies.  The hotel was right beside a lake, and Kaiser was very intrigued by the sound of geese honking whenever we took him outside to do his business.  Michael ordered us a warm pizza from Papa John’s to enjoy as we settled in after our second long day of driving.  We were very happy with the Hampton Inn for our three-day stay.  The bathroom was spotless, the linens on the bed were clean,  and the room even included a leash hook.  The lobby offered warm Otis Spunkmeyer cookies and hot coffee 24 hours a day.  The location on the east side of the city provided a convenient starting point for the excursions we would make in the upcoming days.